In this ever-growing market of portable audio, not only are audiophiles looking for the best earphones and headphones, some are even willing to spend more on dedicated devices for playing and storing their high quality audio tracks.

We would like to thank Soundaware for this opportunity of participating in their M1Pro Review Tour.

Coming out of China, the Soundaware M1Pro “Esther” comes at a cost of around 550USD, and seeks to provide a portable solution that can play many different file formats at high fidelity and with long lasting battery life. It certainly plays music well, but there were some things that I personally found issue with.

For our readers who are too lazy to read through entire essays to get an opinion, here’s the quick summary version before the rest of the details:

Cons
-Antiquated interface
-No quick searching inside songs
–No gapless playback
-Needs to scan for music
-Slow to power up
-Not the sleekest design out there!

The design of the M1 Pro is not flashy – it’s all business and no play, with its straight, blocky and slightly chamfered edges and bead blast textured metal surfaces. In fact, it even looks slightly 80s / 90s retro. In an era of large buttonless touchscreen designs, its quiet, chunky looks combined with its “business-grey” coloured makes the M1 Pro look like some sort of retro Brutalist architecture inspired design. Its aluminium surfaces feel sturdy and weighty enough, but pressing on the front face buttons sometimes feels a little creaky and plasticky, although the side lock switches, volume control and power are better.  Running along the top edge are the 3 jacks – 3.5mm, Line-out, and coaxial out, each with a nice gold played treatment, and they were probably one of the snuggest fits I’ve experienced. Pushing my IEMs 3.5mm plugs into them felt very secure and satisfying and gave me confidence that the contact was perfect. Along the bottom is the micro-USB port as well as a soft rubber plastic flap that opens to reveal the 2 micro-SD card slots to support 256GB total of storage space. 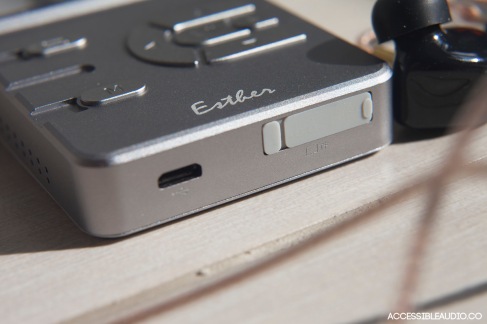 I’m not a fan of the 3 purely aesthetic indentations on the left edge which seem to serve no purpose other than create extra sharp edges to run my fingers into, but I can’t really criticize it in terms of its functionality. All the buttons are comfortable to reach with one hand. The arrow buttons are for navigating the interface, and nestled in between them is Play/Pause, and on the left is Return to previous page and an M button which either brings you back to the main options page or to your currently playing song. 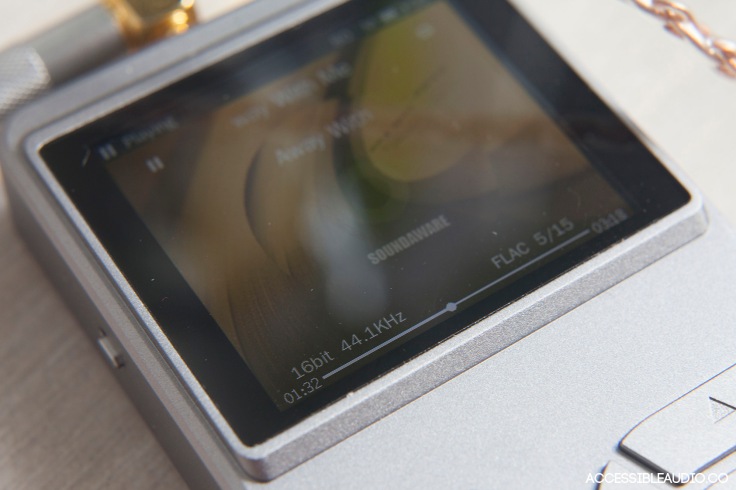 What the M1 Pro does well is that it can play basically any file formats that an audiophile could ask for, from MP3s all the way to DSD files. In my 2 weeks of testing, I was also pleased by its efficient battery usage – I could consistently get at least 8 hours of playtime with it. While the small screen does look very oldschool, I found that it was sharp and bright enough for typical light conditions, and its interface did not have too many colours to show anyway.

It also offers settings such as Sleep mode, Gain settings, DAC playing mode, Sound options, and Fade options. I could not hear any difference in its Fast Roll-off and Slow Roll-off DAC options, but I’m sure it will be a welcome addition to other users. The gain settings were definitely useful for powering my IEMs with different sensitivities – the MacaW GT100s which I had problems driving with my phone were easily driven by the M1 Pro and sounded better than ever.

Volume rocker buttons and control was occasionally not very responsive on the first press, and I would have liked if the long-press delay time to quickly change volume was shorter, but the fine volume controls offered by DAPs like this is definitely a welcome change to the large volume jumps in typical smartphones.

However, the actual operating system and user interface detracted from the experience for me. Powering up was also a rather slow process as you have to hold down on the power button, then watch a loading animation for a few seconds before everything is up and running. Copying files over to it was simple enough – I was pleasantly surprised to find a USB micro-SD reader was supplied inside the box. However, after putting the card back into the M1 Pro, I then realized that I had to go through the arduous process of scanning music, something I never had to do when using modern smartphones.

I was also turned off by the very old school interface which reminded me of using Nokia phones like the N95 with its outdated graphic backgrounds. Another design choice which irked me was how they divided the interface in half when going through the music library; an entire half of it was dedicated to showing a giant folder/file icon which showed which folder/file number was currently highlighted, leaving next to no space to show the entirity of longer Artist or Song names.

The thing that really diminished the quality of the M1 Pro for me was the lack of gapless playback. I was baffled to find that such an expensive and dedicated music player did not have gapless playback and while its sound quality is great, it really took me away from the listening experience as I was listening to Katatonia’s Sanctitude live album.

Finally, a more minor issue is that there’s no way to search through songs (scroll through the progress bar) apart from holding down on the left/right arrow buttons. It’s very clunky and slow to do so, and it’s somewhat troubling when even the original iPod had a better method of doing so.

Despite my criticisms of some of the design features above, the M1 Pro excels where audiophiles pay most attention to – audio quality and playback. I was not able to hear much if any hiss, sound quality was clean without any noticeable peaks in certain frequencies. Overall it was adept at bringing out details cleanly and to me, had a neutral sound signature with the slightest bit of warmth to it.

The most noticeable difference for me, as a daily user of my phone as a music player was that the frequency response was flatter and cleaner – there’s an audible peak or some sort of distortion in the mid to mid-highs on the OPX, which has made me often resort to lowering the volume when listening to music with loud volumes in that frequency range. Overall, everything also sounded ever so slightly less congested. There also seemed to be slightly tighter bass impact with a slight decrease in quantity.

Compared to the FiiO E07K, a classic portable DAC Amp, the differences were very minor. My experience was that the Fiio was even more neutral with less warmth and impact in the bass frequency regionm but other than this, they’re quite evenly matched.

The M1Pro compared to the AK380 also has slight differences. In terms of details they were both good, but the AK380 has a noticeably warmer sound especially in the low end, and had a bit more power to it, while the M1Pro is drier and more neutral. The highs also seemed ever so slightly wider and clearer in the AK380.

Is the Soundaware M1 Pro worth it? For some people who don’t mind not having gapless playback, an old interface, or features that other players offer such as WiFi connectivity or the Android OS platform to run other apps such as Spotify or Tidal, I think that this is actually a capable dedicated audio player with a neutral and detailed oriented sound signature. Its 8-9 hour battery life is also nothing to scoff at, and its powerful enough to drive most earphones and headphones adequately. Audio purists who only want to listen to music without all the bells and whistles and appreciate its spartan design may find that the M1Pro is their choice of DAP. I hope that Soundaware will be able to make changes to the firmware to support gapless playback and improve it’s interface to make the M1Pro an even better experience.