Today I’ll be reviewing the Heir Audio 4AI S. I couldn’t find too many reviews about this company’s products, but luckily that turned out to be a non-issue, as the 4AI S is quite good. Priced at $400, this IEM certainly doesn’t come cheaply. Is it worth the money?

Note: This review is a guest contribution from Aaron Sigal from Resonance Reviews, and was not written by staff at Accessible Audio. If you would like to contribute to AA as well, please use the contact form here!

Disclaimer: This review is based upon a sample unit provided to me by a manufacturer or distributor in exchange for my honest opinion and un-edited words. I do not profit in any way from the writing of the review. I would like to thank Sunny at Heir Audio for sending me this review unit. You can find the 4AI S for sale here on the official Heir Audio website.

Preference and Bias: Before reading a review, it is worth mentioning that there is no way for a reviewer to objectively pass judgment on the enjoy-ability of a product: such a thing is inherently subjective. Therefore, I find it necessary for you to read and understand what I take a natural liking to and how that might affect my rating of a product.

My ideal sound signature would be an extended sub-bass with a leveled, but textured, mid-bass. The mids should be slightly less pronounced than the treble, but still ahead of the bass. I prefer a more bright upper range.

The 4AI S scales well with higher-end sources, and benefits greatly from a clean line-out. While it didn’t take too much amping to achieve high volumes, doing so without a noticeable noise floor required me to not use my Nexus 6P or HiFiME SPDIF DAC. 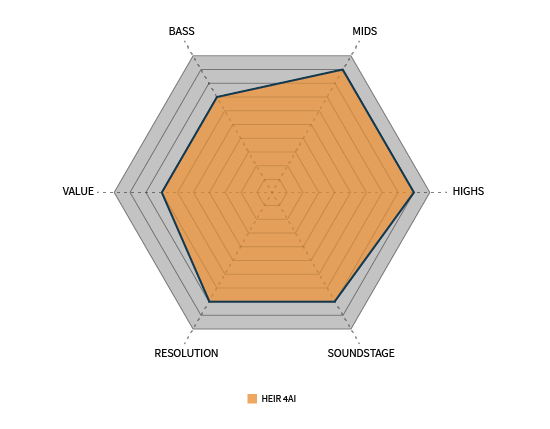 The high-hats of In One Ear were well-defined in the mix and had a very good level of detail. Each individual hit of drum-sticks against the metal was audible, and the decay speed of the treble was very well tuned. It sounds natural, but quick nonetheless.

The synths in the intro of Midnight City were clear and placed well within mix. These treble-bound instruments took shape smack in the middle of the din. The drum hits, which are sibilant on poorly tuned “treble-heavy” IEMs displayed no such behaviors on the 4AI S despite having a significant presence in the song. Most importantly, I found that the treble never got lost or pushed around in the chorus.

All in all, the treble of the 4AI S is expertly balanced with the rest of the sound. Present in high quantities, yet never sacrificing in quality, the treble of the 4 AI S is among the best I’ve heard, beating out several other similarly configured IEMs in this general price-point. This is especially noticeable in Daft Punk’s Outlands, where the violins never got pushed out of audibility, and maintained a textured and distinct body throughout the duration of the song.

Mids: Songs used: Flagpole Sitta, Jacked Up, I Am The Highway, Dreams

The mids are very articulate on the 4AI S. Flagpole Sitta’s dense chorus sounded open and clear in a way that I’d only ever experienced on a single other IEM. Instrumental separation is quite good, with little-to-no smudging on even the farthest-back guitar. Tonality on said guitar was pretty electric as well.

Jacked Up’s pianos had a good hardness to them, indicating of a very healthy attack and decay in the mids. The melodies of guitar feedback and pianos exhibited a very good timbre, mixing well with the vocals. I Am The Highway performed quite similarly, exhibiting many of the same qualities that the 4AI imbued the previous two test songs with. Additionally, vocals, both male a female, were natural and bodied, with male vocals lacking a slight amount of heft to them.

While I was skeptical about the bass performance of the 4AI S at first, I found that the more I listened the more I came to appreciate the tuning. Moth by Audioslave is a good example of where the bass shines. The bass guitar sounded deep and had a distinct, but not overpowering, presence within the mix.

Gold Dust performed decently, but there was a noticeable lack of depth, with a merely average level of impact. This is not surprising to me, as the IEM is tuned for a completely different kind of music. Dubstep is certainly not what Heir Audio had in mid for the 4AI S.

In For The Kill, while not as bass-heavy as I would have liked, sounded good in its own right. This is because the 4AI S, while bass-light, is actually quite good at manipulating the lower frequencies, lending the sonorous bass-line of the song a dynamic and active feeling.

Leave Me suffered from much of the same that ailed Gold Dust. Again, no surprises here. The song sounded a bit dry and lacked impact and depth. 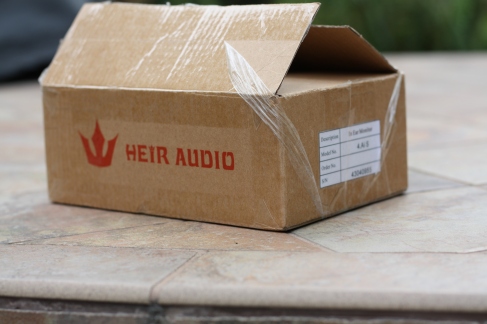 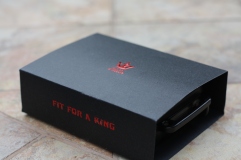 The 4AI S arrived inside a plain brown cardboard box with the Heir Audio logo emblazoned on the side. Inside I was greeted by a good amount of foam padding, beneath which was the crush-resistant case in which the 4AI S and its accessories were stored. All in all, very efficient packaging that doesn’t skimp out on protecting the product.

The 4AI S is constructed in the same general way as a CIEM: you have a plastic body on top of which is lain a textured face-plate. My unit was immaculate. Even the etching on the side was clean-cut and well done. The face-plate is covered in a good amount of clear plastic, which does a good job giving the IEM a sense of visual depth.

The cable is detachable and uses a 2-pin system. The cable is so snug, that it took me a good ten minutes to get it out from the housing, though I was being very careful. The cable itself is of the 4-core braided variety and has plastic moldable ear-guides on it. There is a chin-slider built from clear plastic that rests right above the Y-splitter. I wish this was made from a more substantive material, despite the fact that it is well-made from a functionality perspective.

The included cable terminates in right-angled 3.5mm jack. The jack is made from plastic, but is substantial enough to the point where I am not worried at all about breakage.

The 4AI S is quite comfortable and ergonomic given its relatively small size. The wide variety of included eartips really helps you find a good fit. I do wish that there was an option to not have the plastic ear-guides on the cable though, as they did cause me some minor irritation while laying down. Alas, you can solve this problem yourself with a 3rd party cable.

Inside the box you will find

The accessory package is quite substantial. I really like the selection of eartips available, and find the cable to be good enough for the price. While the rubber DAP bands were a bit tight on my current portable rig, a Hidizs AP100 stacked on a FiiO A5, I am still quite happy with them.

The carrying case is also pretty good. It’s sized somewhere in-between a mini-hard carrying-case such as those used by Rose, but still smaller than a Pelican 1010.

The Heir 4AI S is an expertly balanced IEM that gives its listeners high levels of clarity without the usual harshness and sibilance afforded by treble-happy earphones. An ergonomic design and mature styling makes it an absolute pleasure to wear, and detachable cabling means that longevity shouldn’t be an issue. All in all, its a compelling package, and should suite anyone looking for a higher-end IEM, so long as you don’t listen to primarily electronic, or otherwise bass-heavy, music.

Middle of the Road