The Lyra, released back in 2014-15 was refreshed along with Campfire Audio’s dynamic and hybrid lineup as the Lyra II, and is a personal single dynamic driver favourite.

We would like to thank Campfire Audio for supplying us with the Lyra II free of charge for this review. The Campfire Audio Lyra II goes for 699USD. You can click here for more information.

You should be ashamed of yourself if you’re an audiophile or earphone enthusiast and aren’t already acquainted with the name Campfire Audio. A small boutique earphone maker that started off making cables as ALO Audio, they’ve released hit after hit with their original lineup of Orion, Lyra, Jupiter, followed by the critically acclaimed Andromeda alongside the Nova. In late 2016, they released the more bassy and energetic hybrid Dorado and the fiercely powerful single driver Vega. 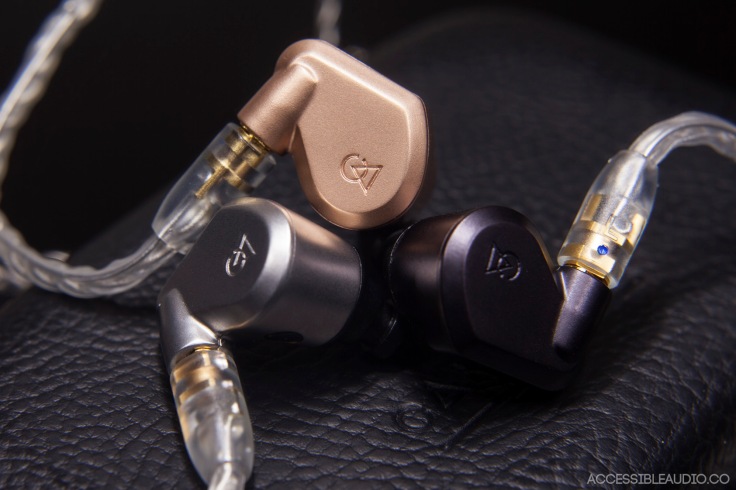 Where does this place the Lyra II in the lineup? Well, it’s hard to say since one of the things that I admire about Campfire Audio’s products is that it’s difficult to pick that one is definitively better than another and hence there’s no fear of an older release being made obsolete by the newer ones. I’ve tried all of their lineup and actually prefer some of the cheaper offerings. The soaring highs and clean cut sound of the Andromeda isn’t quite for me, and while the Vega is extremely engaging, and the Dorado has its own special energetic flavour, I’ve found that the Lyra fits my tastes better than any of the others.

Summary for the lazy 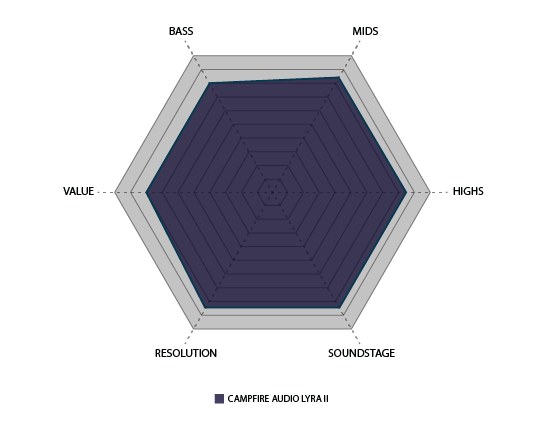 Cons
–Exhibits a smidgen of harshness at the very high notes which seemed to be resolved over time (burn in is real? )
-Fit doesn’t feel as secure as some other IEMs 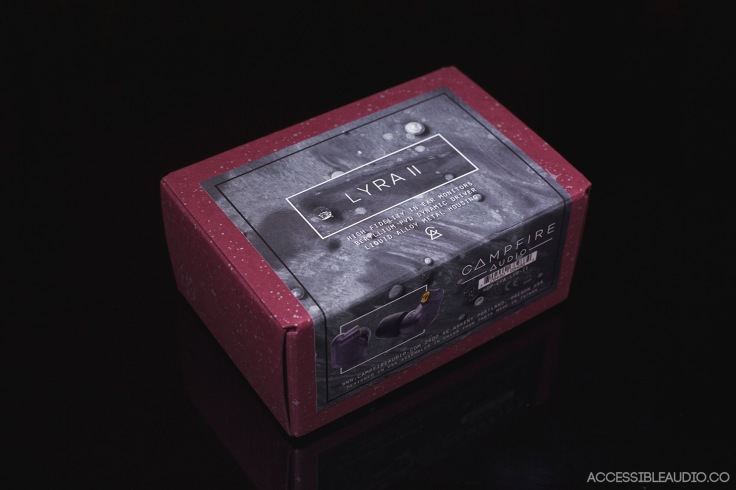 I’m sure someone is going to ask, so I’m going to say it now – the Lyra II has the same specs as the original in terms of driver design, the only difference is the packaging and housing material (it used to be a glossy black ceramic instead of the “Dusk” coloured liquid metal alloy shell used now)

Having reviewed the Campfire Audio Dorado before, which features the same liquid metal alloy earphone housing with the same form, I don’t want to spend too much time going over the build quality and design for the Lyra II. Like the rest of the new released lineup, it has excellent and sturdy build quality that’s a little heavy due to its metallic nature, but is fitted into a small but sturdy package that will leave you feeling confident that it will last. The Lyra II is “Dusk” coloured, as opposed to the rose gold of the Dorado. It is also different to the Dorado in that it has a shorter, more standard length to the sound nozzle which lends itself to a more comfortable experience.

I picked the SpinFit tips as my eartips of choice for the Lyra II. I initially used the medium black silicon tips but found that the insertion was too deep as it allowed the nozzle to lie level with the end of the tip as well, so  it was a little uncomfortable and seemed to boost the highs too much that it became sibilant. For what it’s worth, the Campfire team recommend using foam tips, but it feels a little dark for me and so I settled for SpinFit. 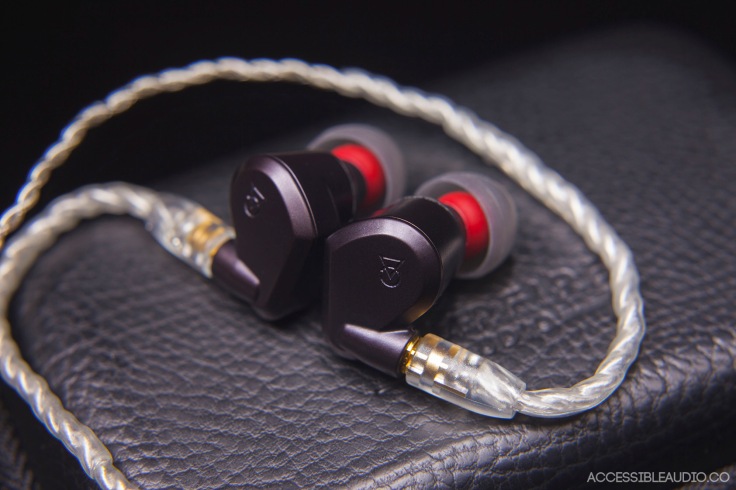 I’ve come to expect a certain sort of “house sound” to Campfire Audio’s products – Ken Ball and his team have always remarked that they simply design it based on the kind of sound they enjoy, and I must say they have exceptional taste. Their products generally lean a little brighter sounding with very extended highs, and always have a very tight, clean kind of sound throughout the entire frequency range – but not with the Westone kind of overly smooth and polite cleanness.

The Lyra II possesses the qualities of a dynamic driver sound with a warm, full bodied sound, but eliminates the flaws that many cheap designs exhibit. With tight bass notes that go deep, and a certain precision in the highs that rivals balanced armature designs, it places right at the top of high end IEMs. It has one of my favourite sound signatures – a gentle W shaped curve with well-balanced boosts to the bass, mids and extended highs, making it a personal favourite.

Its soundstage is not the widest, with more height than width, but the sense of height to the presentation brings into focus a very enjoyable spaciousness that gives room for every instrument to breathe.

The Lyra II’s bass frequencies brings a a lot of warmth to the sound, and while hefty and deep reaching enough to effortlessly blast out bass heavy tracks, it’s also quite fast, with deep subbass tones only lingering on for a fraction of a second. The result is a solid hitting bass that doesn’t bloom too much, leaving ample room for textural detail reproduction.

Mids are natural sounding with even distribution throughout this region. It doesn’t sound like a completely flat midrange, but the Lyra II puts out plenty of pressure throughout to maintain decent instrumental and vocal presence and energy. The midrange frequencies aren’t pushed unnaturally forward, and typically don’t become the focus in more layered tracks, but they are undoubtedly well resolved. Coupled with the generously extended high end, there is a bit of emphasis on light airiness and openness in the sound, which again reinforces the Lyra’s slightly bright sound tuning. 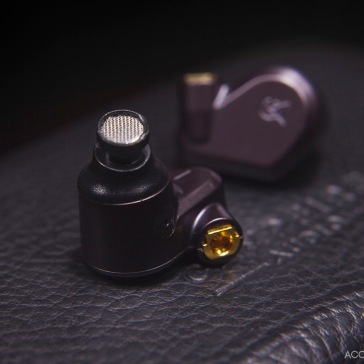 With a fast bass range as well, there is a feeling of precision and energy noticeable in its very snappy and authoritative snare drum reproduction that weaker dynamic driver IEMs often lack. The Lyra II is able to crack out clear snare drum attacks with impressive surgical precision and energy – attack is quick and focused more on high end impact crispness than lower frequency body. The very high frequencies are very extended, sometimes to the point of being slightly aggressive at times – this was especially noticeable when I first tried the Lyra II with the stock silicon tips, and seemed to be tamed over time but may be attributed to the better fitting SpinFit tips.

To me, the Lyra II is like the Vega’s little brother. The tuning is very similar, and I would say in terms of technicality, the Vega is better, with an even cleaner sound, an awesomely deeper reaching, tighter and heavier hitting bass, a similar midrange but even more precise and impressive highs. But after extensively comparing both, I feel that the Lyra II is more comfortable for a leisurely listening experience – the Vega is like an unrelenting juggernaut of sound which becomes a little fatiguing in extended listening sessions for me.

A much warmer, boomier bass is the most noticeable difference, and the midrange generally a little more recessed in comparison to the Lyra II. Dorado’s highs have the cleaner, more exacting sound of balanced armatures and are slightly more extended though.

The 846 is well known for its bass prowess, but the Lyra II is no slouch either and excels in different areas. The 846 bass is harder hitting but has a drier, more flat thwacky sound to it  whereas the dynamic driver of the Lyra II reproduce a more natural sounding rounder impact. The 846 also rolls off at the highs (using the neutral filters) and has a fuller lower mid range and will have a darker sound in comparison.

The Lyra II has a tighter, more surgical precision to it’s sound that the Oriolus which exhibits a more robust, flatter mid-high to high range but at the expense of sounding less extended in the highs. The Oriolus’ bass is also fatter and a little “lazier” with slower decay as the rumbling notes last longer. Soundstage is more wide than high here. If I only listened to dubstep and trance I would probably choose the Oriolus over the Lyra for an even warmer, rounder sound with heavier bass.

Disclaimer: I’m still a beginner at measuring IEMs, and am only using a Vibro Veritas for my setup. Accuracy should not be trusted before 10Hz and after 10000Hz (according to the Vibro site). But overall I have found decently accurate results with this cheap measurement setup. 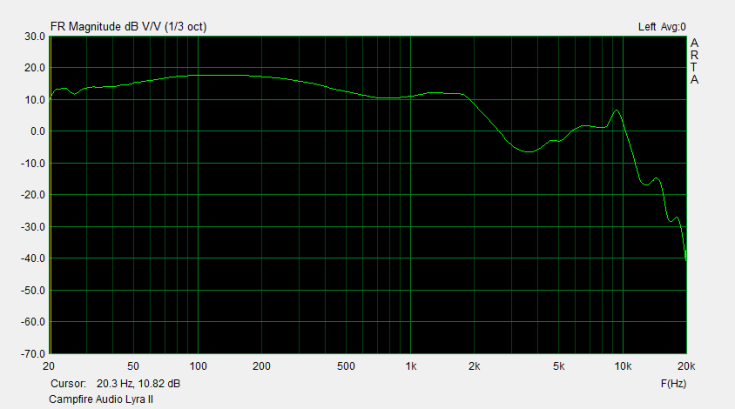 The Lyra has rekindled my love for single dynamic driver designs in an industry that has been incredibly reliant on multi-driver balanced armature designs with a focus on bigger numbers rather than perceived audio quality. This is another example of Campfire Audio’s dedication to getting the best sound out of every one of their designs. I find myself constantly going back to the Lyra II for its dynamic driver warmth which gives enough liveliness coupled with its refined precision to its sound that really resonates with my personal tastes. The Lyra II isn’t cheap – but it’s an earphone I would surely recommend to someone wanting to drop their money on one high end purchase.