1More has an ever expanding roster of products, from very affordable single driver earphones, Bluetooth earphones, all the way up to multidriver designs, and now they’ve come out with a new product to fill a specific niche – a Lightning cable with Active Noise Canceling hybrid design earphone.

We would like to thank 1More for offering their latest product to us for review. Head over to their site for purchase details.

We’ve had the opportunity to review several of 1More’s products, such as the Triple Driver, Quad Driver, and the iBFree Wireless earphones. My overall experience with them has been very positive, especially with the Triple and Quad Driver Earphones in terms of the quality of audio, but the iBFree was a little lacking when it came sound despite being affordable, comfortable and easily connectable in terms of Bluetooth implementation. I was a little hesitant when I received the 1MORE Dual Driver ANC Lightning In-Ear since it seemed like 1More’s offerings were weaker when combined with technology, but I’ve been pleasantly surprised by the E1004.

The E1004 is another solid addition to 1More’s growing lineup of great products. The E1004 performs admirably, combining both quality sound and active noise cancelling features. The audio quality is very commendable; much better than the average earphone, but if you’re only looking for the best audio quality, you would do better to look at 1More’s stars – the Triple and Quad Driver earphones. It’s still a great purchase at this price point though, as the Active Noise Cancelling works perfectly to reduce a lot of background noise, allowing you to have a quiet, enjoyable listening experience without having to push volume to ear damaging levels.

It’s become a standard for 1More’s products to come with a great sturdy packaging filled with a generous amount of ear tips and other accessories, and the E1004 is no exception. This product also comes packaged with ear securing add-ons which can be stretched over the shells to provide an even better and more secure fit. I suspect 1More added this as the shells are actually somewhat large – the extra ear hooks may help some users achieve better fit.

Just like all their other products, the E1004 has a high quality of design and build quality. While appearing to be a little on the large side, the earphones are actually very light and comfortable and fit comfortably. An interesting detail that is different here is the elliptical shaped nozzle – a departure from the typical circular nozzles in most other earphones. While it may seem strange at first, it actually fits better than the round shapes; take a quick look at a friend’s ear and it will be evident that our ear canals are not perfectly rounded. In fact, some of the best fitting eartips I’ve tried are the slightly oblong shaped tips from Fender/Aurisonics, so I am not surprised that other manufacturers are starting to do this. 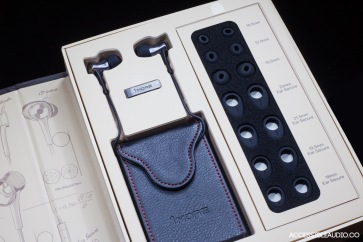 It features attractive curved, ergonomic forms made of a lightweight machined metal material for the outside facing body of the shell, combined with a matte black plastic on the interior faces. They are also conveniently labeled with enormous “L” and “R” to mark the Left and Right sides respectively. As a designer myself, I’m a little iffy about the choice of cursive font to go with the modern, futuristic aesthetic, but that’s just me nitpicking. The in-line mic, controller, as well as the Lightning plug are all excellently made with tasteful combinations of metallic and matte plastic. I love the nice gold accent on the 5-in-1 controller button as well, giving a bit of colour to an otherwise monochromatic design. The cable is also a nice braided Kevlar wire that’s soft and supple, and not too tangly either.

The Active Noise Cancelling toggle can be found on the inline controls on the left edge. Turning it on will hide the red colour underneath the switch, while off will reveal it. I tested the E1004 on my daily commutes on the Hong Kong buses and MTR. Active Noise Canceling earphones function by having a microphone that receives outside sounds and plays back an inverse wave of those frequencies in order to cause a phase problem which can significantly remove the presence of those sounds. Typically, the easiest sounds to remove are low frequencies, while human voices and higher pitched noises are harder to cancel out.

With 1More E1004, turning on the noise cancelling option made me realize just how much background noise that was constantly in the urban environment. The noise cancelling completely removed the hum of all the loud car engine, ventilation, and all sorts of white noise that most people living in the city might not even realize was present around them. It makes it feel as if I was finally in a perfectly quiet room when the option is on. Human voices did not completely disappear like the lower frequency sounds, but it works well enough to significantly reduce the volume of conversation so that it sounds very distant and quiet – as if everyone was talking politely in hushed tones. For everyone wondering if it would be effective in screaming baby on a plane situations, I also did some tests with my 4 month old niece at home and it works about as well as it does on any other human vocal range. Still better than nothing. I found that biggest hurdles were very loud beeps and hissing noises, just as 1More’s diagram shows (the canceling only goes up to the 2000Hz range) but we can always hope for even better active noise canceling technology development in the future.

While the Active Noise Cancelling technology isn’t able to 100% completely remove all the external sounds around us, the 1More E1004 does reduce it by a huge amount so that a slight boost in volume will take care of any noise that manages to get through. This means that you can enjoy your music at a reasonable volume without having to turn it up to 11 to overpower everything else, which can lead to hearing loss over time.

The E1004 has very commendable sound quality, possessing a nautral, overall tonally balanced frequency response without any noticeable distortion and sibilance even at loud volumes. It has one dynamic driver to produce the low frequencies and a balanced armature driver in each ear that sorts out the mid and highs.

In my opinion, it excels the most in the midrange and higher frequencies, giving clean instrumental and vocal reproduction which is very capable of bring out good amounts of micro details without any harshness to it. While male vocals tend to sound a little thin sometimes, female vocals sound just perfect and lively – every detail revealed with a smooth, lively tone.

The bass frequencies are no slouch either, being reproduced with a very natural warmth thanks to the strength of the dynamic driver. Bass impact is not especially tight sounding, having that slightly slower, soft sound typical of dynamic drivers, but 1More showed much restraint in not boosting it too much as is common in consumer level products so that it never bleeds and covers the midrange. While the bass never takes centre stage in the E1004, it is still very capable of bringing out a decent amount of fun bass impact when the time calls for it, making the E1004 a great all rounder earphone that will appeal to many consumers. The only thing I would want is a slightly fuller lower midrange to give the sound a little bit more body.

In terms of separation and soundstage, it doesn’t really compare to higher end earphones, but it performs admirably overall and brings a clear sense of positional accuracy to the overall reproduction.

I don’t really have any issues with the controller. It’s as advertised, a controller that has the DAC inside it, and lets you adjust to the previous and next track, change volume, and pick up and hang up calls. The build quality is great, the little joystick is also smooth and responsive. 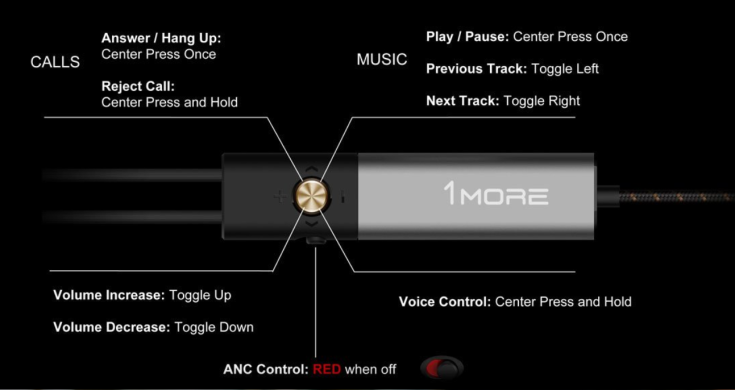 So far, my experience with 1More has been nothing less than stellar. A totally new company just a few years ago, they’ve really brought the standards of budget audio products up with their products. They have consistently improved every time they’ve released something new. Their design is great, build quality sturdy as a rock, and audio quality is terrific for the price, hitting way way above their price bracket. So, the E1004 may be missing a little in terms of its audio quality compared to the Triple and Quad Driver earphones from 1More, but it still sounds very good. For someone looking for both noise cancellation and quality audio to listen to, it is an excellent purchase that I highly recommend.